Hello Did Someone Say Beer?!

There is nothing better than a local Beer after a long touring day in Israel! & if you already There, why not trying some of those vibrant Israeli Spirits! or maybe an Ice Cream!

Do you need any help placing your order?  That's why you hired a Tour Guide!

FIND ON THIS PAGE:

Israel’s Beer Scene, One More Reason to Visit the Country

In only 20 years, Israel went from having only two national beers, the famous Goldstar and Maccabee, to hosting an exciting, varied and vibrant craft beer scene. New craft breweries open their doors every year, and quality is impressive.

There are plenty of reasons for visiting Israel, but Israeli beer is now one of them. The ever-popular Goldstar and Maccabee have been around since the 1950s. Still, the turn of the century brought a new wave of innovation and creativity.

There are beer festivals and competitions now, and plenty of microbreweries that capture locals and tourists’ imagination. Bars and restaurants are slowly offering new brews, and it’s in these craft beer bars where you’ll find the best scenario to meet the country’s new beer. Here’s all you need to know about Israel’s craft beer.

Where to Drink Craft Beer in Israel?

It’s easy to find a cold ‘Hetzi’ (500 ml pint) of beer around Israel, especially in Tel Aviv and Jerusalem because of their thriving food scenes. And although the national, big manufacturer beers like Goldstar are easy to find, you need to know where to look if you want to find great craft beer. Most craft beers are small productions, and there isn’t enough to go around! Here are my favorite spots.

Beer Bazaar, with several locations in both Jerusalem and Tel Aviv, is not only a specialty craft beer store, but a beer producer, and has numerous bar locations, all with a great ambiance. It all started in 2012, and the concept has been growing non-stop ever since. Here, it’s all about beer — good beer, and good times. Don’t miss it.

Beer Station, also with several locations, but only in Tel Aviv. This is the place for beer lovers, and the atmosphere is pretty fun! Expect live music, soccer matches on the TV, and proper beer.

Try the house Beer Station Pils or their Lager Red. They also offer international beers such as Urquell and Erdinger in case you're feeling homesick.

What are the Most Exciting Craft Beers in Israel?

Here are some craft beer brands that are well worth seeking out:

And there’s more, much more!

These are just a few craft beer bars and artisan beers in Israel, but there’s much more on offer. Like going on a Safari, the streets of Tel Aviv and Jerusalem have become a paradise for beer lovers who can find unique brews in the least expected places.

Come to Israel and taste the beer. Let a personal guide take you to the hottest spots for the coldest brews.

THE BEST SPIRITS IN ISRAEL TO TRY

When going on a tour of Israel, nothing draws one to the culture of the country like the food and drinks of Israel. Apart from the Israeli wine & israel ice cream , the region also offers a variety of different spirits. Some of these spirits are native to the Middle East and are absolutely incredible. These top Israelian spirits should play a key role in why you should be visiting this country soon!

Arak is a spirit that is native to Israel that is made from distilled grapes with the addition of aniseed for flavor. Although it is clear when in the bottle, once the spirit is in contact with water, it instantly turns a milky white color.  It is a high-alcohol spirit that is either consumed with water or a favorite to add to coffee or to enjoy as an aperitif. In many situations, especially with millennials, this Israelian spirit is enjoyed over ice-cream as the ultimate, adult-dessert.

Tubi 60, with intense flavors of lemon and herb, that is known to provide more than the typical alcoholic-beverage. With an alcohol percentage of 40, this intense citrus-based liqueur of Israel is associated with giving a high effect, similar to what Ecstasy provides. Although the company guarantees that all ingredients are up to the legal standard, no one truly knows what is in Tubi 60. It is, however, appreciated not only for the high effect but also the fact that it is made from natural ingredients, which makes use of native herbs, fruits and spices.

Much like other parts of the world, Vodka is the most popular spirit in Israel. With the younger generation, vodka is often consumed with energy drinks and other mixers. The older generation, especially of eastern origin, enjoy their vodka on the rocks.  Whatever the preference, the sales of vodka continue to remain steady throughout the country.

Brandy is a popular distilled spirit of Israel, where internationally recognized brandies have been produced. The Carmel & Tishbi brandies, for instance, received spectacular reviews and major awards in the most prestigious international competitions. Along with Carmel & Tishbi, Golan Heights Distillery is another name high up in the Israel spirits business.

There has been a major shift in the production of quality whiskey in the last few years. Israeli distilleries have vouched to produce some great whiskeys in the next few years; placing Israel on the map for their quality production. The first few that was produced had already shown massive potential, with international judges praising the work of these Israeli producers.

It is not only the award-winning wines that have created major tourist-attraction, but it is also largely because of these distinct, Israeli spirits. Whether it be the native drinks or the more popular ones, Israel has managed to distill most quality spirits, and have been doing spectacularly with it.

When deciding where to go on your next travel adventure, why not put Israel on your itinerary? These unique drinks are only a taste of what extraordinary experiences await you. 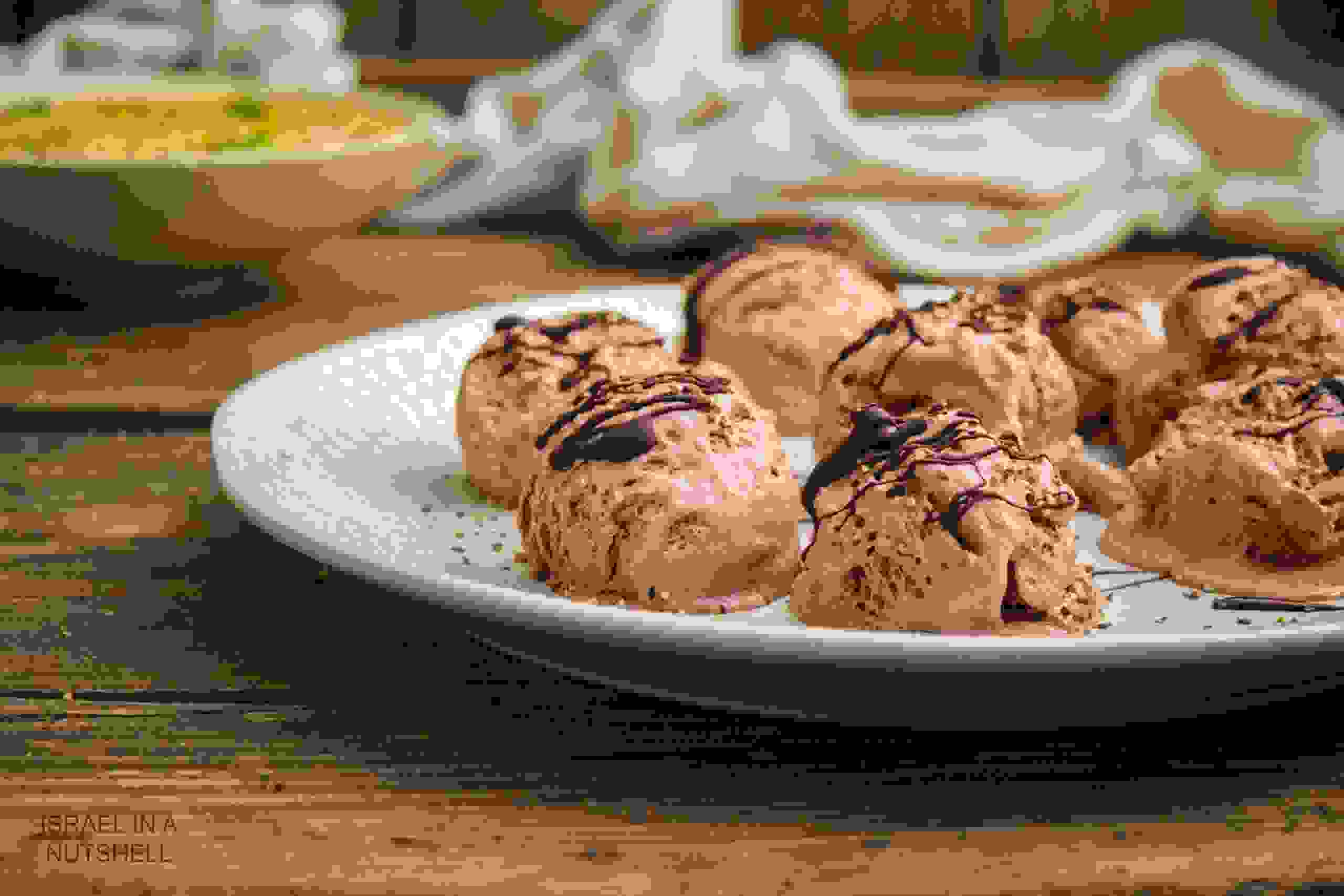 Israel’s true ice-cream journey started in 1950's with the iconic soft-ice-cream-on-a-stick that was launched by the Belgium producer, Artic. This was especially appetizing with the chocolate layer over the ice-cream. Although a competitive ice-cream company emerged a year later-Kartiv, these two companies eventually merged a few years later. This merged of the Artik-Kartiv company allowed an iconic ice-cream dessert to appear , the ice-cream sandwich (Kasata), and it only went up from there. Later Whitman Feldman, Staruss, Adnir & Tnuva that is aquired by Osem came along !Today, Israel’s ice-cream industry is booming, with hundreds of incredible & weird flavors.

Yes, it is indeed an ice-cream flavor; an unusual one no less. Considering that chickpeas and hummus play a key role in many Middle-Eastern dishes, it should come as no surprise that this is indeed, an ice-cream flavor. The little ice-cream parlor of Leggenda makes this ice-cream by combining ground chickpeas, tahini, vanilla and sugar.

A small, Italian-run ice-cream parlor, Delicato, is known for their incredible range of unusual ice-cream flavors in Israel. One of these includes the savory Mozzarella and Basil flavored gelato. It might be an odd one, but it seems to be a local favorite!

Another one of Delicato’s unique creations includes an oily-orange flavor. This one might be slightly more tempting, as the creamy combination with the refreshing orange is a delightful summer treat!

Anita is an incredible parlor that offers over 150 different flavors. One of these includes a popcorn, honey and caramel flavored ice-cream. It is a spectacular combination of sweet and salty and is a truly unique experience.

One of Anita’s other flavors includes something that isn’t as much unusual as it is innovative. This takes a unique spin the more traditional “rum and raisin” flavor. By combining the traditional Limoncello Alcoholic beverage with creamy Gelato, Anita has created something spectacular.

Keeping in line with the alcohol-ice-cream innovation, a bar in Tel Aviv created a delicious, liquorice and Arak-liquor flavored ice-cream, to celebrate this uniquely middle-Eastern beverage. For those who aren’t aware, Arak is an aniseed-flavored distilled beverage, that is translucent in the bottle, but turns milky white when it comes into contact with water. It is a fascinating and delicious alcohol beverage to enjoy all over the country.

One of the greatest, artistic flavors include the Labneh and Zataar ice-cream, which is essentially a thick home-made cheese and vibrant herbs. The ice-cream is often given some added texture with pistachios or sesame seeds. It is a truly Israelian ice-cream treat.

The wild and wacky ice-cream flavors of Israel is one of the country’s best-kept secrets. For anyone who loves simple vanilla or a punchy Limoncello flavored ice-cream, Israel has mastered the craft of unique and delectable gelatos and ice-creams.

So, when visiting Israel, be sure to try every single ice-cream flavor, and support the tremendous number of local ice-cream parlors for an unforgettable gelato experience.

Ben & Jerry’s in Israel created a new, special flavor, to celebrate Israel’s third election in a year. The ice-cream, known as ‘third-time, ice-cream’ refers to the fact that when you run into a friend for the third time, you should treat each other to ice-cream. Many loyal customers shared their thoughts on what the flavor should be, and this included everything from fig to bits of chewing-gum. The final product, however, was a delectable vanilla-and-chocolate ice-cream with chocolate-almonds and white chocolate chunks. This innovative flavor was a hit – not only because of the taste but because of its symbolism. 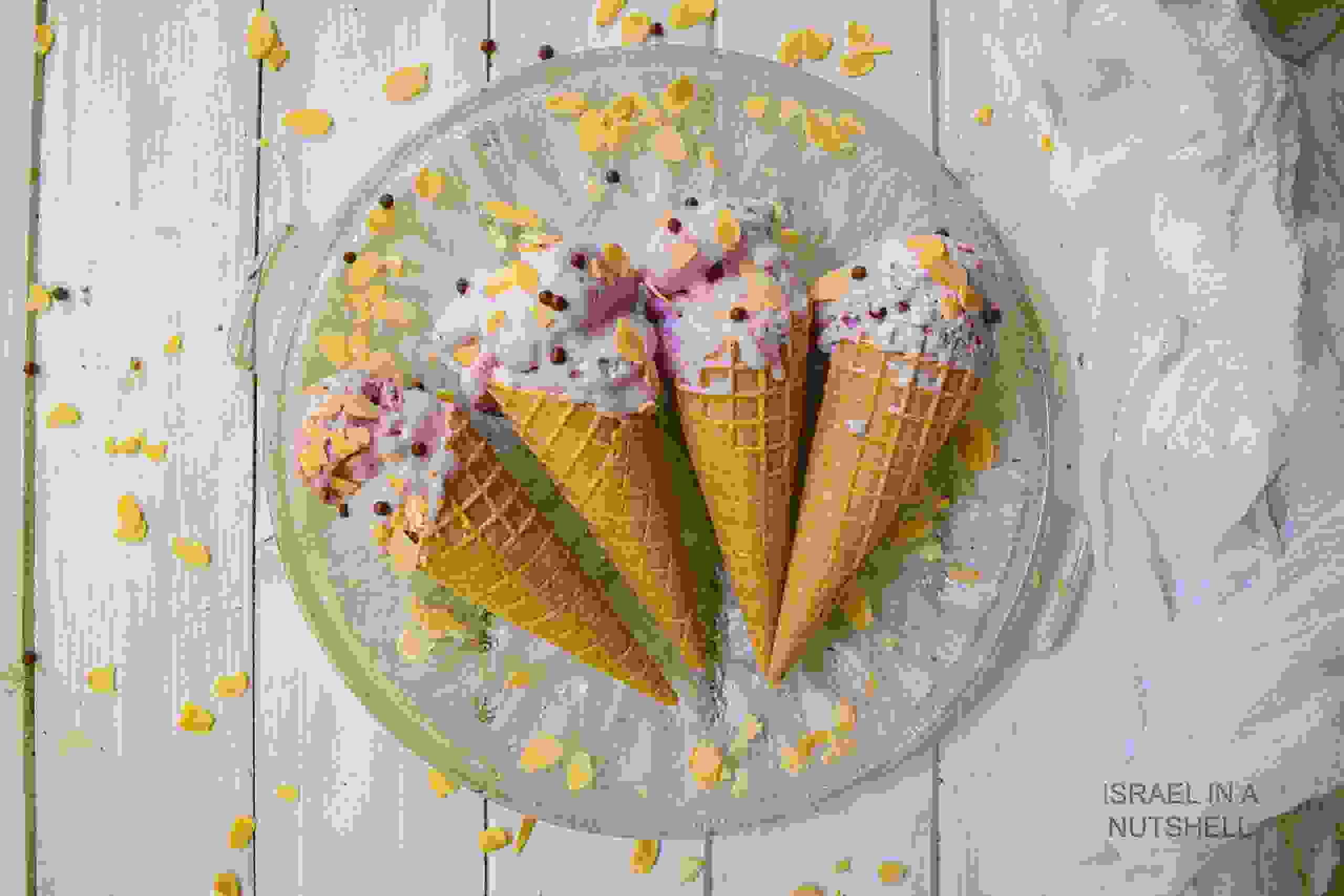 Israel In a Nutshell

Copyright © 2021 Israel In a Nutshell - All Rights Reserved.